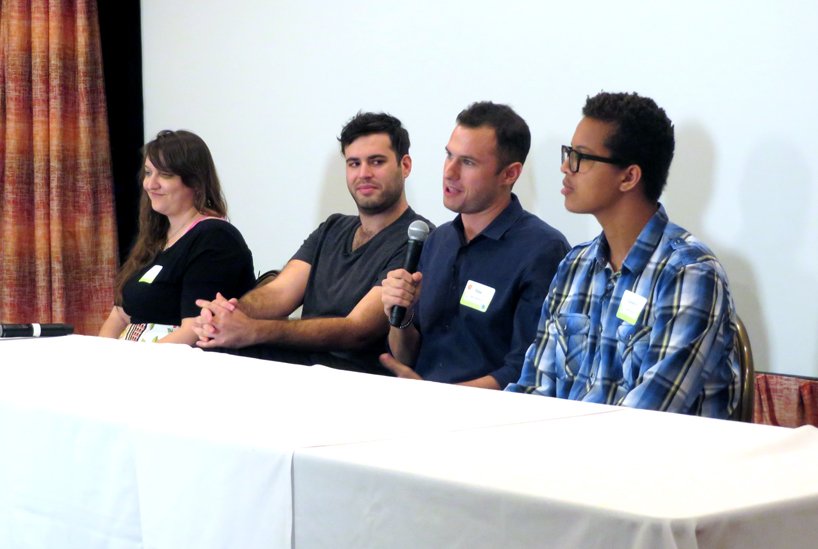 NORTH HOLLYWOOD, CA — Some 120 educators, professionals, legal advocates, and parents from across the globe gathered in Los Angeles recently in support of twice-exceptional (2e) students and adults.

These individuals — those who are gifted but also have learning differences such as ADHD, dyslexia, autism, anxiety, among many others — typically require learning and work environments that significantly differ than what can be found in a traditional school setting. They need to operate in spaces that maximize their potential for input, contributions, and impact.

To that end, the Bridges 2e Center for Research & Professional Development held its biennial Vision & Leadership in 2e Symposium earlier this month. The overall focus of the event was to explore what elements need be present in a 2e-friendly environment, whether that be at school, work, or home.

“How do we make life better for kids who are cognitively diverse?” asked Carl Sabatino, head of school at Bridges Academy, which caters specifically to twice-exceptional students.

Attendees were broken up into work groups to explore this question with the understanding that they are among those who can affect positive change.

Participants considered elements such as student-centered curriculum, flexible space, permission to take risks, autonomy, presence of mentors and support, positive communication, and parent modeling, among many others, as being key in building 2e-friendly environments. The 2e Center solicited additional input from parents, teachers, researchers, and professionals around this question, with the goal of issuing a declaration around what these environments should include.

The event also featured keynote addresses from author/advocate Debbie Reber and paleontologist Jack Horner, a Q&A with Hollywood producer and The Good Doctor showrunner David Shore, a panel of students who graduated from Bridges Academy, brainstorm sessions exploring the facets of an ideal 2e learning or work environment, and the induction of the 2019 2e Hall of Fame class, which includes Susan Assouline, Sally Reis, Linda Neumann & Mark Bade, and James Webb. Following the event was a set of “Super Sunday” sessions, which featured leaders in the field presenting their latest research.

The Symposium began with Baum speaking about the achievements of the new Hall of Fame class. Following the induction, Reber — author of Differently Wired and founder of TiLT Parenting — shared her experiences as an advocate for her 2e child.

Then on Saturday, Horner, a dyslexic paleontologist who consulted on the Jurassic Park films and served as at least a partial inspiration for Sam Neill’s character, spoke about being bewildered by his struggles in school.

“I didn’t know what was wrong with me,” said Horner, who failed out of college multiple times. “I knew I wasn’t lazy.”

Horner’s dyslexia wasn’t diagnosed until he was nearing 30 years old. By then he had discovered his first dinosaur and been hired as an assistant at Princeton. He would go on to discover the first dinosaur egg in the Western Hemisphere, name dozens of dinosaur species, win a MacArthur Fellowship, and author multiple books.

“I didn’t think I was smarter than anyone else. I just pushed ahead,” said Horner, whose interest in digging and dinosaurs could be traced back to his earliest years. “I thought I was lucky. I thought about good things that happen. If bad things happen, I just move on.”

“I definitely was persistent,” he said. “I had a lot of passion. I wanted to be a paleontologist.”

“I didn’t know what was wrong with me. I knew I wasn’t lazy.”

Shore, who was interviewed by Bright & Quirky’s Debbie Steinberg Kuntz, discussed his Good Doctor character Shaun Murphy, who is on the autism spectrum. He shared how he is sometimes posed the question, “do you really think [Dr. Murphy] could work as a surgeon?”

Shore’s response: “Yes. I’m confident that a lot of [people on spectrum] are surgeons.”

“Prejudice disappears when we meet people,” Shore said. “People make assumptions about autism. But when you get to know [people with autism], you see they are fully formed human beings who want the same things we do.”

Shore said he has received largely positive feedback regarding the show and character, including hearing from a child who was motivated to return to treatment after watching the show.

A couple of themes emerged from the panel of Bridges Academy graduates, representing Generations X, Y, and Z, speaking about their successes and challenges: support and tenacity.

“I don’t fail — I just haven’t succeeded yet,” said teacher and artist Amy Faigin, who is on the autism spectrum. “That refusal to stop. I approach things with a lot of confidence and a love of learning.”

Professional musician Daniel Zuker spoke to both traits, saying he received “absolute love and support” from his family, but that the biggest gift was being told that he needed to be his own advocate.

College student Cameron Aaron spoke of his mother having the patience of a saint and encouraging him to “find your own journey,” while digital marketing specialist and entrepreneur Max Goldberg said to his mother in attendance, “You are a relentless advocate for me and have been for my entire life. You told me that ‘the world will catch up to me and I should keep doing what I’m doing.’”

Indeed, Hall of Fame inductee Reis, a professor at the University of Connecticut, reinforced these perspectives while also fomenting the need for and goals of the Symposium itself by citing a study of 2e kids who go to college and are successful.

“Most name a parent as their greatest advocate (usually the mother),” Reis said. “None name a teacher.”

Goldberg, who credits his family and fiancee’s support for helping him manage his anxiety, had one final message.

Editor’s note: The Bridges 2e Center for Research and Professional Development is part of the Bridges Education Group, which also oversees 2eNews.com.

2e News is the online home for the latest news, features, opinions, and research around neurodiversity and twice-exceptional education.
View all posts by 2e News →